A downloadable game for Windows, macOS, and Linux

NOTE: Play in fullscreen or download the WIN build, otherwise the game will run really badly. If the WEB build doesn't start or if your geometry is see-through, your browser doesn't support the game.

Combat prototype of fast, first-person action game, i play on adding roguelite elements in the future.

If you have performance issues with the web build, please give the windows build a try.

Damn I knew this game was crisp for a reason. Loved breakmetal.

fun are there still updates coming

Thanks for the interest! I'm working on another game for now, "Breakweapons".  Give it a try if you like gunmetal! (make sure to download the standalone, the web version runs badly)

The asset workload of making 3d enemies, sounds, code, etc. all alone proved to be too much for a solo developer

how'd you make this game what software and was it easy?

Thanks, and yeah.  Someone pointed it out before, i'll make sure to include the music selection in the intro.

As for copyright claims -  you can turn the music off in the options, although i don't mind people not making videos of the game yet, as it's very early in development.

Oh it's fine, I enjoy it. I'm not currently monetized anyway, but for those that are would need this warning. Love the game though!

Incredible game! Very challenging at first, then I kept discovering things that made it fun and only added to the challenge at higher waves.

Unlimited slow motion does seem a little powerful. Is it intended to remain unlimited or is that just the case for the demo?

Thanks!  Slow motion is more for testhing purposes, i'm not sure if it'll be an actual mechanic in the game.

I mean obviously, the game is in it's very early stages, i don't plan on it staying wave-based like this, so make sure you don't burn yourself out on it!

The slow motion is cool, I think you could keep it. It would just need to be earned. Maybe the character pulls out a fresh cigar and lights up to represent the duration of the ability.

It's pretty cool, sorta like the "bullet time" that you see in other games

And with me being overwhelmed by the wave mode, i think it makes for an interesting style of play.

Hello. I have thought maybe there should be level progression and different type of weapons. Maybe there should be some modern weapons (Handgun, Assult Rifle), and some hell-like weapons (Skull-Launcher, Lava Lazer).  You can implement whatever you want, but these are just some opinions I wanted to share with you, thanks.

Thanks for the input.

All of the stuff you are mentioning are indeed planned! More monsters, more gun variety.

We'll see how all of this is going to pan out, i'm trying to build a strong foundation to the game right now, before handling stuff like expansive levels and other weapons.

It's the funniest game I've play so far!!! I know it's only a lil' prototype, but you've got so much potencial ;) Just one question, can you credit the music used for this game?
Reply
brum3 years ago

Will work on adding more weapons and monsters soon!

Sorry for no credit, music is by Dance with the Dead, i'll make sure to give in-game credit in future demos.

tanks you very much^^

The concept is fun so far. The main wave mode is a bit boring because I feel overwhelmed with so many enemies coming at me, so I know I have to kick them to keep building more ammo, but kicking them takes so long and I end up getting hurt easily. Having a weapon count as life that you can pick up if dropped when hurt is a good idea.

This creates that tug of war of kicking enemies one wave, and shooting them when there are a lot in the next wave, that the rules seem to cater to but is lacking in the demo. Also, waves should either last a bit longer or only start once the enemies of the current wave are dead so that it is more fair. Currently, they pile up a bit too quickly. And it should take maybe 2 kicks to kill a bat. It was hard to tell if that is the case currently but just putting it out there.

Either way, I'm loving the visuals, music, vibe and gameplay concept so far! Would love to see this fleshed out more!

Gotcha! You could give it a try again, i've updated the game recently, although it's still just endless waves of the same monster, there is more feedback and a new gun. The enemies don't gain HP anymore, just speed.

Nice, will try it out!

It says Not avaiable on windows, why?

Weird, where does it say that? The windows build downloads fine for me at the bottom.

it says install this time

Yeah, i will have more weapons and monsters, i'm just busy building the core systems.

MAC builds are also available from now on. 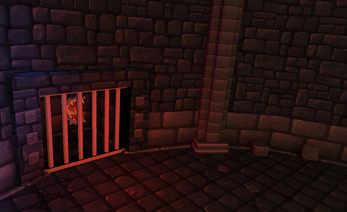